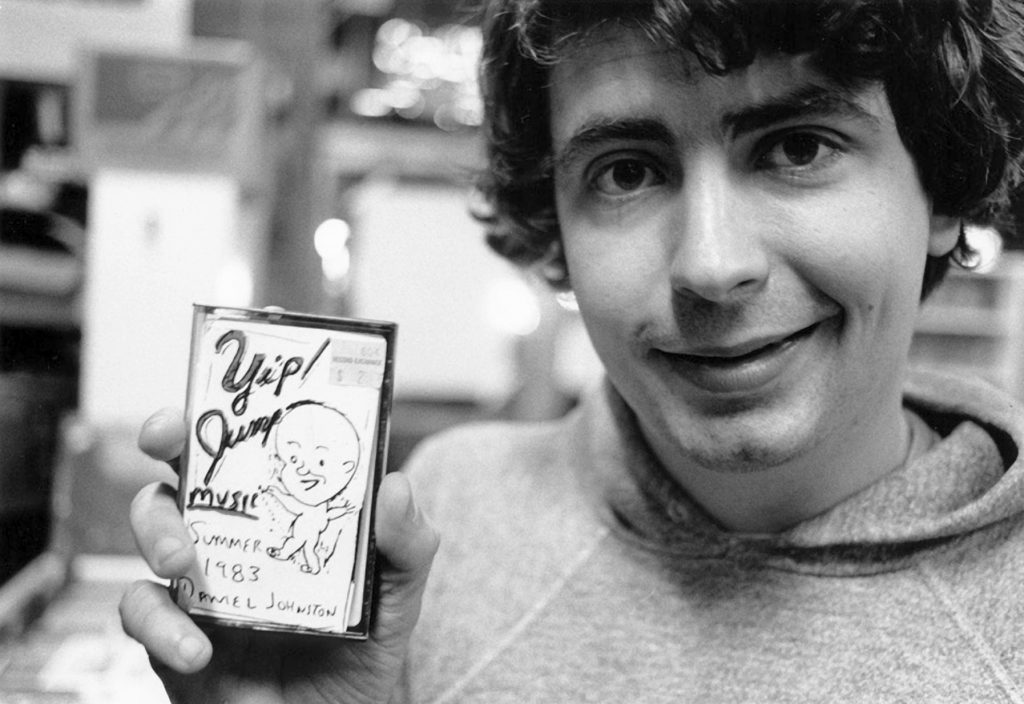 Born in Sacramento, California, Daniel Johnston grew up in New Cumberland, West Virginia. He began creating music in high school, recording piano, vocals, and chord organ on a boombox. Johnston dropped out of Abilene Christian University in West Texas after being enrolled only a few weeks, but later attended Kent State University’s art program. During this time, he recorded his first album “Songs of Pain”.

Two years later, Johnston dropped out again and eventually moved to Austin, Texas where he began cultivating a following by passing out his cassette tapes to passerby. His local success landed him an appearance on MTV’s The Cutting Edge series in 1985.

In 1988 Johnston was diagnosed with schizophrenia. Over the course of recording his album “1990” that year, his mental health deteriorated drastically. He was involuntarily committed to a mental hospital after playing at a music festival in Austin, Texas in 1990.

Johnston continued to record and collaborate with high profile musicians. In 2004, he released the two-disc compilation “The Late Great Daniel Johnston: Discovered Covered” with renditions of his work by Jad Fair, Bright Eyes, Tom Waits, Death Cab for Cutie, Beck and others.

In 2005, Jeff Feuerzieg directed the award-winning documentary “The Devil and Daniel Johnston”. Around this time, Johnston formed his own label, Eternal Yip Eye Music. He released his last album through Yip Eye, “Space Ducks: Soundtrack”, in 2012. He embarked on his final tour in July 2017. In 2018, the city of Austin honored Johnston by naming January 22 “Hi, How Are You?” Day.

Daniel’s family shared a statement with his passing:

“The Johnston family is deeply saddened to announce the death of their brother, Daniel Johnston. He passed away from natural causes this morning at his home outside of Houston, Texas.

Daniel was a singer, songwriter, an artist, and a friend to all. Although he struggled with mental health issues for much of his adult life, Daniel triumphed over his illness through his prolific output of art and songs. He inspired countless fans, artists, and songwriters with his message that no matter how dark the day, “the sun shines down on me” and “true love will find you in the end.”

Daniel’s life and music inspired the Hi, How Are You Project to encourage open conversation around mental health. His birthday, January 22, is celebrated as Hi, How Are You Day.

Dick Johnston, Daniel’s older brother says of Dan, “I always wanted Danny to feel like his own person, and in control of his own life. Since beginning to work and travel with him in about 2003, we gratefully were able to travel the entire globe for over a decade to get out before the fans. He was always, everywhere, warmly received and he at least knew he was well loved. Health issues have plagued us for years, I’m glad for the time we had.”

Tom Gimbel, Daniel’s manager of over 25 years, says, “I am so saddened by the news of Daniel’s passing. It has been the greatest honor and privilege of my professional life to work with Daniel Johnston – someone who I consider to be one of the greatest songwriting geniuses of our time. In our time together Daniel was more than an artist; he was a friend, he was family. I will miss him greatly but will smile every time I hear his songs.”

This site uses Akismet to reduce spam. Learn how your comment data is processed.